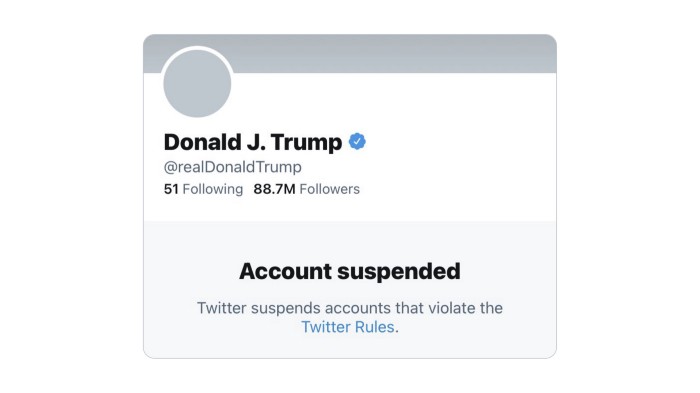 Edit 06.04.2021: Following the ongoing social media bans even after former President Trump’s term has ended, Trump has launched his own website, where he plans to update his fans with news from his wife, Melania Trump, and himself. According to The Guardian, the former US president will soon launch his own social media platform. “And this is something that I think will be the hottest ticket in social media, it’s going to completely redefine the game, and everybody is going to be waiting and watching to see what exactly President Trump does. But it will be his own platform,” claimed Jason Miller Senior Adviser to Donald Trump.

As it is known worldwide, current United States president, Donald J. Trump’s Twitter account has been suspended just two days after his supporters stormed the US Capitol last week. He is also banned from using other social media platforms such as Facebook, Instagram, Snapchat, YouTube, etc. at least until the end of his term. This has prompted an overall discussion about the impact of social media and how to act responsibly.

Since long time there has been a common understanding that all users are responsible for their own content and have to follow the platforms’ rules. Generally, it is prohibited to post anything that is disruptive, hateful, offensive, discriminatory, threatening, harassing, or defamatory. For a long time therefore social media companies have left most of the responsibility for the content that is published with the users and interfered almost exclusively in the case of very clear infringements such as sexually explicit or clearly violence-inciting posts.

The most newsworthy example of a public figure whose social media actions have caused nationwide as well as worldwide unrest is the current US president, Donald J. Trump. With 88 million Twitter followers and an account that was the 6th most followed on the platform before the ban, it is clear that his message has a wide reach, whether you agree with President Trump’s policies and beliefs or not. Furthermore, in 2020 he was the #1 most tweeted about person worldwide, according to Twitter. But for many, he is also the clearest example of how social influence can be misused. His actions, and those of others in his sphere, have sharpened the debate on what the rules or guidelines for responsible behavior on social media should be, particularly for politicians, and which role platform providers should play in enforcing these rules and hold users accountable. A good solution could be to increase awareness among social media users through constant education efforts. At the same time, there is a call by a large part of the population that more fact-checking, moderation, and monitoring by the social media platforms would be a good step forward, albeit without dictating too much how one is able to use his or her profile and which information a person can share — as long as no harm is being done.

The dangers of misinformation

One of the biggest potential dangers of social media is without a doubt the possible spread of misinformation, especially in areas where this can cause significant harm. When creating or sharing content on social media, integrity is always key. Not everyone has the best of intentions however and some even go as far to use social media and their influence to advance their own agenda, no matter the consequences.

Yes, Trump again. But here is why… From his 36 daily tweets, many of his devotees have taken every word as an official government statement, including his factually wrong tweets about the COVID-19 pandemic. In addition to openly refusing to wear a mask (despite US Centers for Disease Control and Prevention’s recommendation to wear masks since March 2020), these actions have caused nationwide protests against government policies to fight against the pandemic. After three months of refusing to wear a mask and his staff pleading him to set an example, President Trump has finally posted a picture of himself wearing a mask for the first time in public in July 2020. He also tweeted:

“We are United in our effort to defeat the Invisible China Virus, and many people say that it is Patriotic to wear a face mask when you can’t socially distance.”

But was it too little, too late? There is little doubt that the misinformation campaign has tremendously worsened the outcome of the pandemic so far. After the nationwide divide that President Trump’s tweets about COVID-19 have caused, Twitter took action and started monitoring his account. The social media platform started adding fact-checks on Trump’s tweets about the virus in May 2020.

The positive impacts of social media

Dispite the misusage of some people, we cannot forget that social media has had many positive effects on society and need to recognise its enormous potential for good. Certain movements have brought society together to strive for positive change. Social media gives people with good intentions and ideas a platform to unite and collaborate in order to try build a better society together. Influencers, people with a significant audience base, can thereby become powerful catalysts to advance the noble causes they embrace, no matter how big or small the cause is. Here are some examples:

One incredible example is the #BlackLivesMatter movement which was started by George Floyd’s murder by Minneapolis police officer Derek Chaivin who pressed his knee on Floyd’s neck for eight minutes. Since then, the world has come together on social media platforms to fight against Floyd’s injustice. In the year 2020, the second most popular hashtag was #BlackLivesMatter and George Floyd was the third most tweeted-about person in the world. Numerous influencers, including celebrities, around the world, have also come together and shared their support digitally and on their cities’ streets, protesting against the injustice. Even our Swiss influencers have taken action to bring awareness to the movement.

Many Swiss influencers, including Xenia (see above), have shown their support for the Black Lives Matter movement by posting completely black posts on June 2nd 2020 with the hashtag #BlackoutTuesday (Source: Instagram)

Another movement that has started since the global pandemic was the Support Small Business movement. With currently over 26 million Instagram posts under the hashtag #SupportSmallBusiness, influencers have shared awareness of the negative impacts of the pandemic and government regulations on small businesses, especially in the gastronomy field. An ideal example is the Family of 5 (FO5) Travel Blog, who started a #FO5Support initiative that supports small businesses in Switzerland through social media exposure. To learn more about the initiative, click here.

An additional movement that has started since the global pandemic is the #StayHome movement. Since the first lockdown in spring 2020, many of our Swiss influencers came together to encourage the importance of social distancing and staying at home by setting an example.

Furthermore, numerous Swiss fashion influencers have promoted the wearing of masks by showcasing how stylish masks can be, like Luisa Rossi.

Stylist Luisa Rossi showed how stylish masks can be, especially when combined with chains. (Source: Instagram)

There are many creative ways to show social media responsibility and still have a voice and stand up for what one believes in. It is important to always maintain the highest level of integrity no matter how big or small one‘s audience is. All stakeholders have a role to play in this matter and users with significant influence need to set a leading example. Companies like Kingfluencers are also picking up the torch in the debate with an active effort to provide guidance to influencers and other players in the eco-system, in order to help realise the true potential of social media and social influence for people and brands alike. To learn more about how, stay tuned for some very exciting updates coming soon …