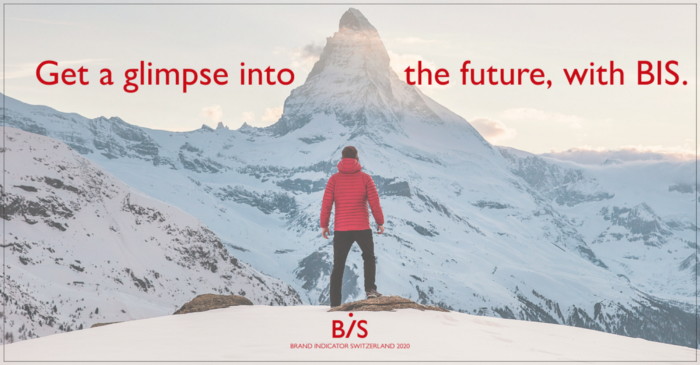 Brand Indicator Switzerland — the first brand survey to include influencers

The “Brand Indicator Switzerland” (BIS), which was developed together with the renowned advertiser Frank Bodin, the insight platform deeptrue, and the social influence agency Kingfluencers, contains two innovations: Most brand studies focus on parameters such as trust or image. In comparison, the recently published BIS measures two brand factors that are crucial to the actual success of a brand, namely relevance and emotionality.

While most brand studies depict the present, the “Brand Indicator Switzerland” also reveals an outlook into the future. This is done by comparing the opinion of the entire population with the view of influencers. Because influencers are ahead of their time and constantly impact their followers, the opinion of these creators is a good indicator to predict the future success or failure of brands or even industries.

The digital influencers are reliable trend barometers because, thanks to their forward-looking nature and pronounced brand sensitivity, they use the social media on a daily basis to make themselves increasingly heard among the “normal” population. Influencers are trend-conscious and very close to brands due to their jobs. They often also reflect a somewhat younger and more future-oriented perspective. The 280 interviewed social media experts were interviewed anonymously for the BIS so that they could act really independently for the study.

The future will be more digital

Swiss people love traditional Swiss brands: Apart from top-ranked WhatsApp, YouTube and Google, the Swiss brands Migros, Coop, Lindt, Toblerone, Zweifel, Ricola, Ovomaltine, Emmi and Rivella are all in the top 16. However, the future is likely to look different; more and more digital brands will push their way into the top positions and replace traditional stars of today. The speed with which new brands such as Netflix or Spotify are conquering the world and thus Switzerland is striking. Frank Bodin comments: “If you analyze the age segments, you can see that Swiss society is currently experiencing a “digital divide” among the 30 year olds; this young population will increasingly take on leadership roles in the coming years and thus fundamentally change the brand landscape.

The aim of the “Brand Indicator Switzerland” is not so much to provide with a brand ranking but to offer brand managers a tool that helps them make the right decisions: Concrete recommendations for action in marketing and communication can be derived from the results of the comprehensive study. A total of 240 consumer brands from all sectors were integrated into the study and evaluated. The BIS shows which brands are relevant and popular among influencers and which brands will therefore tend to perform better or worse in the future.

Based on the opinions of both the interviewed consumers and the influencers, the study uncovers a number of other valuable insights. For example, the BIS provides indications that some brands and industries are already undergoing change. The BIS results also show how strongly brands are able to differentiate themselves and position themselves at the top or rather at the bottom of the league.

With the help of the “Brand Indicator Switzerland”, brand managers are now able to react immediately. For example, with better communication, which brings out the emotionality of a brand and thus improves the public image of the brand.

The BIS not only shows how the brands are developing individually but also points out interesting industry dynamics and measures the degree to which the industry players differentiate themselves from one another. One example is the telecom industry. There, Swisscom and Sunrise are clearly ahead of the pack. The market position of both UPC and Salt is less impressive, despite all efforts. In the eyes of the general population and influencers, the Wingo and Yallo, which appeal to a younger target audience, perform rather poorly. Without fundamental efforts on the part of those responsible for the brands, it is possible that these brands may find it difficult in the future in terms of their competitive position or market share.

The current BIS Power Brands among the population

Click here to find out more about our Social Media Services.