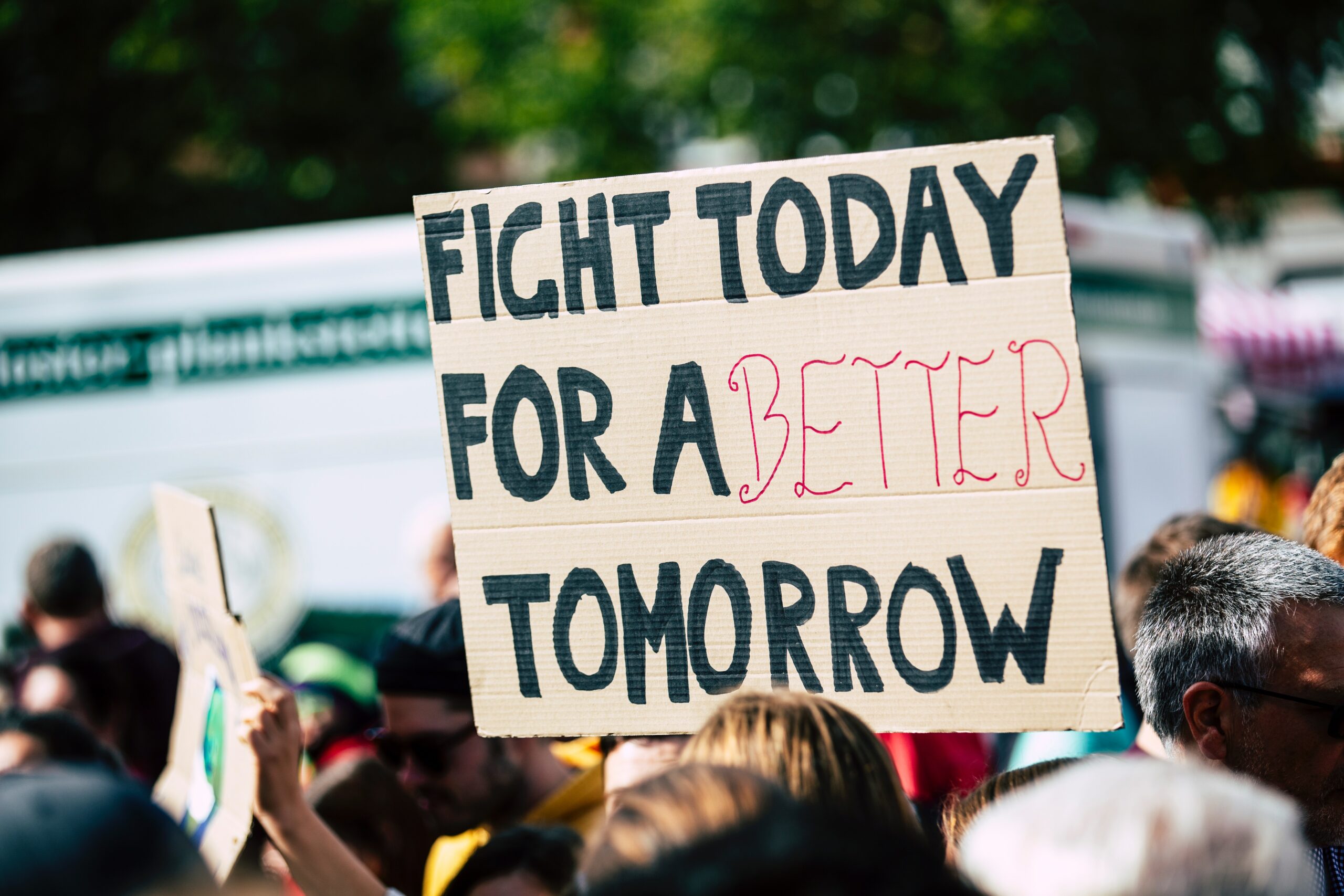 Social media is used for more than posting holiday pictures or the outfit of the day. Many users, including influencers, are also bringing awareness to sociopolitical topics and encouraging their followers to take actions such as voting or participating in protests. What are the pros and cons of taking a stance, versus keeping politically neutral?

Whether you like it or not, politics is all around us and impacts our daily lives in many direct and indirect ways. It is a topic of discussion amongst family and friends. Compared to our neighboring countries, talking politics is still somewhat taboo in Switzerland. This phenomenon can be witnessed online as well, including in the behaviours of influencers. A good example is voting. Every few months, during initiative season, more and more creators and influencers are sharing information about the different initiatives. Many don’t share any pro or con information, but rather encourage their audience to vote. It is also clear to many, especially now, that politics does impact our daily lives. “Especially now, when the pandemic affected all of us, it is clear for all that politics has a huge impact on our personal lives,” according to Andri Silberschmidt, member of the Swiss National Council (FDP).

Influencers can have significant impacts on the outcomes of votes. For example, one might even say that the referendum for same-sex marriage and adoption rights, which was held on 26 September 2021, may have been overwhelmingly approved by Swiss voters thanks to the Komitee Ehe Für Alle’s marketing campaigns and social media. Many Swiss influencers, including those who normally don’t engage in sociopolitical dialogue, like Steven Epprecht, have stepped up and encouraged their community to vote “yes.” Also, content creators and casual social media users alike have voiced their opinions and shown their support. Even normally politically neutral brands like Ikea Switzerland have shown their support for the referendum both online and off.

Should Influencers Take a Stand on Sociopolitical Issues?

On the one hand, just like many of us, most influencers are not political experts. On the other hand, influencers do have the power and an indirect responsibility to use their large reach and bring awareness to certain topics. This debate has gone on for years and was highlighted in last year’s Black Lives Matter movement where many influencers and content creators worldwide, with large and small communities, have spoken up. The fact is, whether influencers talk about political issues or choose not to, they get criticized.

Of course, influencers are not obligated to talk about political issues, just as politicians are not obligated to “run a lifestyle blog or write travelogues,” as Michael Walter put it nicely. As a rule of thumb, Andri Silberschmidt recommends that only those who are enthusiastic about it should get involved online. Everyone does have the right and privilege to form their own opinion and vote in Switzerland.

The Benefits of Influencers Taking a Stand on Sociopolitical Issues

Influencers have a large reach and can influence the perception of thousands, if not hundreds of thousands of people. If they can influence their audiences to buy a product, why shouldn’t they influence their audience to make positive changes in the world and discuss political issues? As lifestyle blogger and digital entrepreneur, Slavia Karlen, said: “Not speaking out on political issues is a missed opportunity to engage in political dialogue.” Swiss politician and member of the Swiss National Council, Andri Silberschmidt, agrees with this statement: “I think it’s cool and I’m always happy when influencers participate in political discourse. Even if they don’t have the same opinion as I do, it’s still enriching because it encourages discussion.”

Another reason why influencers should be involved in sociopolitical issues, especially if they are passionate about certain topics, is that they can change the world in positive ways. As musician and outspoken influencer Moo Malika said in our Clubhouse talk in April 2021, “I actually always think to myself, angry people have changed the world. It wasn’t those who didn’t dare to say something, but those who spoke out and took to the streets. I am of the opinion that one must draw attention to wrongdoings.” Generation Z in particular, doesn’t necessarily listen to politicians or traditional celebrities, but they can be swayed by their favorite influencers.

Influencers have a unique position to inform and educate, and must act responsibly in wielding that power. Influencers can provide a platform to their communities and amplify their voices for causes that are near to their hearts.

Of nearly 5.5 million Swiss residents who are eligible to vote, in the year 2020, 49.3% have participated in votes. According to the Department of Swiss Youth Parliaments, almost half of Swiss voters between the ages of 66 and 75 always vote, whereas nearly two-thirds of voters between the ages of 18 and 35 either never vote or seldomly. Younger voters tend to vote selectively, only participating in initiatives that they truly care about. As observed in recent Swiss initiatives, like the referendum for same-sex marriage and adoption rights in September 2021, social media has made a huge impact and significantly increased the participation of young voters. Influencers, content creators, and casual social media users alike have encouraged their communities to go to the ballot box and it worked: The participation rate of eligible Swiss voters has increased to 52.6% and 64.10% have voted yes.

The Downsides of Influencer Involvement

On the other hand, if not carefully managed and properly communicated, voicing one’s opinion can lead to something that many influencers fear: being canceled. This happened, for example, with ex-freestyle skier Miriam Jäger, who still has her comments limited to this day due to her stories in June 2020 where she spoke critically about the Black Lives Matter demonstrations in numerous major Swiss cities. This also cost her an influencer deal with Swiss Post.

One plain reason why influencers should not be involved in political issues is the fact that they are not political experts. As beauty and lifestyle content creator Anastasia Casaluci said: “That’s what politicians are for. We can’t do it all. Many people simply don’t know enough about the subject, and I think that certain things should simply be left to the experts in the fields.”

Furthermore, influencers have more than their community watching their every move. Important stakeholders such as agencies, employers, and the press always stay up-to-date with their influencers’ online activities. One wrong move and an influencer’s career can be negatively impacted. This is why entrepreneur, model, and content creator Michael Walter usually keeps a distance when it comes to speaking out about sociopolitical issues: “I keep asking myself how far I should go on social media and to what extent I should express my opinion on sociopolitical issues.”

Another simple reason why influencers don’t get involved in political issues is the fact that they lead very busy lives with multiple jobs and the different hats they wear as influencers, i. e. administrator, bookkeeper, marketer, writer, photographer etc. Most influencers in Switzerland work part-time as influencers. Being an influencer consists of more than posting images and videos and answering comments on social media. There are a lot of hours of work that goes behind one post. “And with (a) job(s), family, dog, etc. — there is not much time left to politicize”, as digital creator Fabio Zerzuben has said frankly.

Who’s Right About Being Right?

Talk quickly about the fact that one big question is: what is RIGHT?  For example you might think that Donald Trump is a bad person and should not win elections because his program is bad but this is all very personal, universal values aside, and for someone else he might be the right choice. Or abortion might seem murder to you, but not to a rape victim … so one very crucial point to take into account is that before speaking up and influencing people you better be 100% certain you’re on the right side of history and if not or or if you don’t have all the info to make a very informed statement should you even be influencing people as someone with the power to do so ? ethical question to be considered !

Throughout history, powerful people have acted in ways that have been revealed to be misinformed and even dangerous, such as doctors promoting cigarette smoking. When influencers consider taking a stand on an issue, it’s important they’re well-informed. From an ethical standpoint, influencers wield power and must be certain they’re acting responsibly.

Tips and Tricks Direct from The Influencers

If you do choose to dialogue about sociopolitical issues, we have listed some tips for influencers as well as everyone engaging on social media. The following are exclusive tips from our influencers, as well as Andri Silberschmidt, along with guidance from the Conscious Influence Hub (CIH).

TikToker wemmse stated: “Online, I only comment on a topic when I feel well informed and confident in my position. But I often put enlightening posts in my story so that those who want to inform themselves can do so.”

Always fact check. Check your information sources and educate yourself before informing others.

Consider adding humor, particularly if you don’t usually post serious content. Satirist Hamza Raya says: “Indirectly, I participate by contributing to the formation of opinion as a satirist.”

As an influencer, your words could have consequences if you don’t watch out. Blogger and sustainability activist Anina Mutter has set some ground rules for herself from the beginning of her career as a blogger: “My basic rules are that I only express myself when I am actually sure that I can stand behind my statement and that I know what I am talking about (of course, I can be wrong there, too). I also seek advice from experts when I am unsure. Or I just allow myself (for the time being) not to say anything if I am not sure.” Slavia warns: “You have to be careful what you say, because if you have even a minimally different opinion, this can unfortunately very quickly end in a shitstorm.”

Educate and suggest, but don’t impose. Understand that what’s right for you might not be right for someone else irrespective of their motives.

Speak mostly with facts rather than emotion. Speak with emotion only when the objective facts support your claims.

Don’t aggressively attack or offen. While respecting everyone’s opinion, be constructive in finding common ground rather than fighting.

There is no such thing as a wrong opinion. Even when disagreeing, act with good manners and propriety.

Even if they don’t have the same opinions as you.

For example, if you are an influencer for an organic farmer and have a clear opinion for environmental protection, say so from the beginning instead of someone finding out later and not taking your opinion seriously afterward. It must be clear that you are expressing your opinion for ideological reasons and not for financial ones.

Don’t use the platforms to just announce your opinion, but to promote discussions and find solutions.

What Initiatives are Coming Up?

On 28 November, we will vote on the Judge initiative and the Nursing initiative, which many nurses and healthcare professionals are advocating on social media for people to vote YES. A vote will also be held on the amendment of the COVID-19 act. The act is highly controversial and widely discussed on social media, and even billboards.

There are many pros and cons to engaging in political debates, and it’s ultimately a personal decision. It’s reasonable for influencers to want to stay out of the fray, but for those who boldly enter, it’s vital to do so responsibly and ethically. They must be cognizant of the potential impact of their actions, and remain respectful of differing views.

And to all Swiss people out there – your vote is your voice, so go vote! Although it might feel like your vote won’t really matter, it will always make a difference.